Adv. Klein is Vice Head of the International Corporate and Securities Department of the firm, and a member of the Executive Committee. Adv. Klein specializes in cross-border corporate and finance transactions, including mergers and acquisitions, public offerings, SPACs, Rule 144A offerings, tender offers, ‘going private’ transactions, spin-offs, PIPEs, and private equity and venture capital investments.

Adv. Klein advises Israeli SEC-registered companies and dual-listed companies on their corporate governance requirements under Israeli law and under the rules of the SEC, NYSE, and NASDAQ. Adv. Klein also advises foreign companies and investment funds on their acquisitions, financings, investments and business activities in Israel. He possesses particular expertise in U.S. public offerings and public offerings of foreign companies on the Tel Aviv Stock Exchange.

Due to his experience in both M&A and U.S. capital markets, Adv. Klein has been involved in multiple de-SPAC transactions, representing the SPAC, the target, lead shareholders, or investors in the SPAC sponsor.

Adv. Klein has been recognized as one of Israel’s leading attorneys in the capital markets, corporate and M&A fields by Chambers & Partners and Best Lawyers.

Adv. Klein advised the Ethics Committee of the Israel Bar Association on rules of conduct for attorneys under the Sarbanes-Oxley Act; crafted the first U.S.-style Shareholder Rights Plan (‘Poison Pill’) in Israel, which enables public companies to defend themselves from hostile takeovers; and lecturers to professional audiences on a variety of legal topics.

From 1992 to 1999, Adv. Klein was an associate in the Corporate and Financial Services Department of Willkie Farr & Gallagher, New York.

"A great M&A lawyer and a pleasure to work with."

"Respected in the market and highlighted by peers for his extensive experience advising clients on international matters, in particular between Israel, the USA and the UK."

"Respected in the market and highlighted by peers for his extensive experience advising clients on international matters, in particular between Israel, the USA and the UK." Chambers & Partners 2020

"Extremely pragmatic, with a very down-to-earth approach… understands the subtleties of securities law."

"Very pragmatic, careful and analytical. He is attuned to his client's needs and is a pleasure to work with."

"Very pragmatic, careful and analytical. He is attuned to his client's needs and is a pleasure to work with." Chambers & Partners 2018

"Lauded for his great business sense and knowledge of Israeli and US securities."

"Lauded for his great business sense and knowledge of Israeli and US securities." Chambers & Partners 2017

Representing Thoma Bravo Advantage (a NYSE-listed SPAC) in its merger with ironSource in a de-SPAC transaction valued at $11.1 billion, including a PIPE investment of $1.3 billion.

Representing Collective Growth (a NASDAQ-listed SPAC) in its merger with Innoviz Technologies in a de-SPAC transaction valued at $1.4 billion.

Representing Claroty, an Israeli unicorn, in its acquisition of Medigate Tech, both cyber-security companies, for $400 million.

Representing Cardiovalve, a medical device company, in its sale to Venus Medtech (Hangzhou)(HKSE), for approximately $300 million. 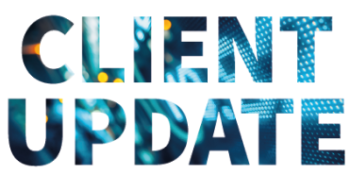 Update regarding the Liability Standard of Dual-Listed Comp...

A Watershed Year for Dual-Listing of Non-Israeli Public Com...

The past year has seen significant advances for Israel’s dual-listing arrangement on multiple fronts – legislative, regulatory, judicial and in […] 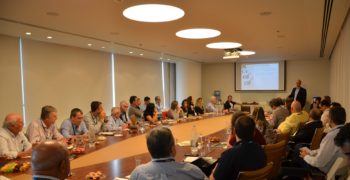 Goldfarb Seligman hosted a delegation of senior executives and directors from the Brazilian Institute of Corporate Governance (IBGC). The meeting […]

Adv. Adam Klein, partner and Deputy Department Head of our International Corporate and Securities Department, participated in the CFO Forum […] 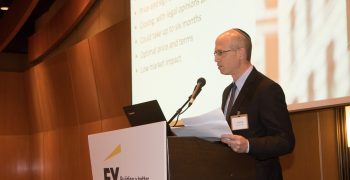